Hello everyone! My name is Theo Hoglund. I`m 23, American, and living in Chiba Japan. I work as a teacher full time, and occasionally do some modeling and acting. I am the drummer in the Tokyo based band Noshup and make House/Electronic music with another American across the internet in a group called Party Force. My hobbies include skateboarding and making art.

I joined this site, because my friend Kevin is doing a good thing, and I want to help out! I will be trying to blog about sports, art, and music, but probably will just end up talking about whatever I want. Enjoy!

Okay! Now that we got all of that out of the way, I think that my first post will be about music. I have been a musician for about 6 years, but only a serious one for about 3. I started getting into Japanese music when in about 2000. I was still just a kid, and watching animes like Rouroni Kenshin, Dragonball Z, and Yu-Yu Hakusho. The ending theme from Rouroni Kenshin struck me as a freaking cool song but I didn`t try and find anything else. In 2002, I got really into Naruto, an anime about Ninjas. My friends and I loved it and I was crazy about the opening music for each season. Thats when I started to research more and try looking up the bands I was hearing.

I started with all the animes that I liked and found those songs in their intros/endings. A couple names that really stuck with me; Asian Kung-Fu Generation, YUI, L` arc en Ciel, Orange Range, The Pillows. So I listened and more and more I got into Japanese Rock. The Indie scene here around 2007 was really good and it reminded me of the late-90s rock that I grew up listening to, but with a bit more punk (which I really loved). So I continued listening and kept finding more and more bands that I liked. Eventually this lead to me studying abroad. I decided that Japan would be fun, as I could explore more music and loved adventure (not knowing any of the language and going to a country that speaks it is quite an adventure.

About a week after I came I met a couple girls in my school that were playing guitar in the hallways. I noticed that one had on a wristband from the band Ellegarden. I was a big fan of the band and started talking to her. She was ecstatic about it and we exchanged numbers after she invited me to a show that her band was playing in the following week. Her english wasn`t great and our meeting place was Shinjuku Station (which for anyone who`s been there, knows that it`s a complete nightmare). I eventually found my way to them and we went to my first live. I had been to plenty of shows, big and small, in the States, but a livehouse is something completely different. I went down the stairs, to this tiny, dark, smoke filled room where everyone except me was wearing black. I was a bit uneasy at first as I had no one to talk to, but once the music started, all of the uneasiness was gone. It was punk. Not straight, fuck the government fuck everything punk, and not bubblegum pop punk, but a punk that found it`s way right into the center of the two and it was beautiful.

One thing that I noticed about Japanese music fans, as opposed to American fans, is that the Japanese are completely loyal to the bands that they like. For example, even if  band is small, fans will go to see the shows and support the band 100% as if they were the biggest band in the world. In America, until the band is huge, everyone seems to be just modest supporters. Of course this isn`t completely true both ways, but if you have a chance, go to a live here in Japan and observe the other fans during the shows. Good music is good music to them, no matter who is playing it.

Since then I have been finding more and more Japanese rock that I like and I hope that it never ends. Coming back to Japan was also partly for the music. I am now a drummer for the punk rock band, Noshup, and I am expreiencing the Japanese music scene from the inside. It`s been fascinating so far and I`m pumped to keep learning more.

Thanks for reading and check back because I`ll be trying to write about skateboarding, snowboarding, art, fashion, or whatever I feel like next!

This article was just about rock music, and I will write about my other musical interests later on, but if you want to check out some good Japanese bands that I like, heres a few that I'd recommend: The Blue Hearts, Asian Kung-Fu Generation, Baseball Bear, L'arc en Ciel, The Pillows, Art-School, Ellegarden, Radwimps, School Food Punishment, Supercar, Shocking Lemon, Okamoto's, and Wino. Look them up and listen! 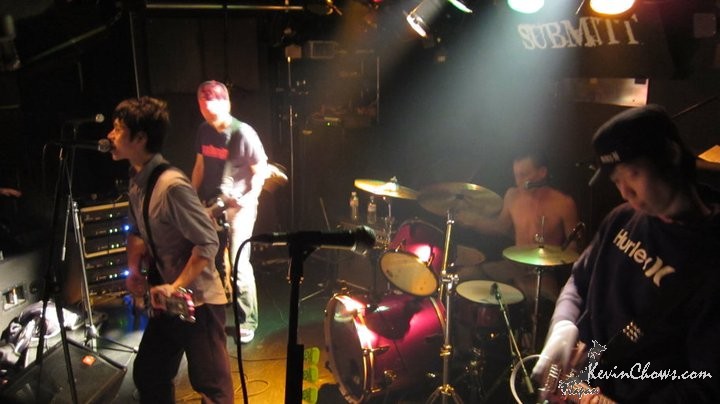